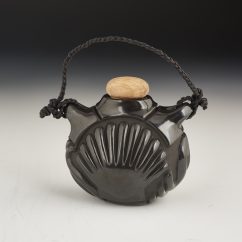 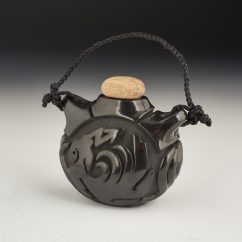 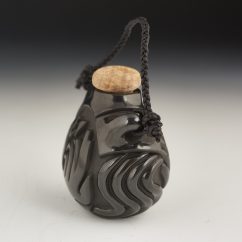 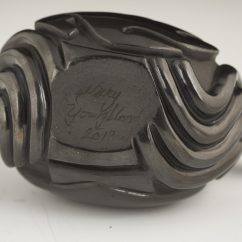 I had asked Nancy if she would make us a miniature canteen. It turns out, she hadn’t done canteens for many years, but was willing to do it. So, she has made some magnificent ones…Oh, my goodness, this one is so outstanding. To add to the originality of the piece, Nancy has carved two different images on each side. There is a carved shell on one side, and a beautiful avanyu (water serpent) on the other side. On each side there are deep carved curved ribs. So much work on such a small form. She whittled a stopper for it and has added a matching braided leather strap. It is magnificent in every way. This would be a perfect addition to someone’s collection who wanted a small example of Nancy’s great black polished work.