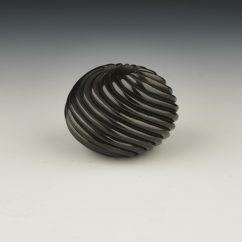 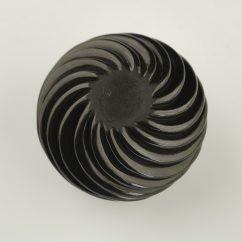 This is one of Nancy’s classic swirl ribbed melon bowls, but in miniature size. The bowl is hand coiled, using all natural pigments, highly polished and fired outdoors. Notice how deeply she has carved every rib, as it slants diagonally from top to bottom. Hard to believe how she achieves such symmetry in her work. Nancy has explained that she can only polish three ribs at a time, since that is such a time-consuming technique. The deep black polished ribs on this piece are fantastic. Such a rich look.