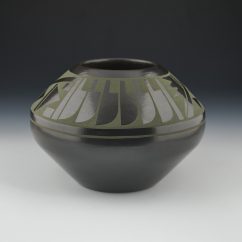 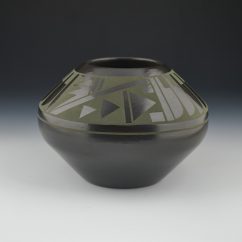 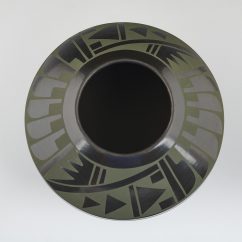 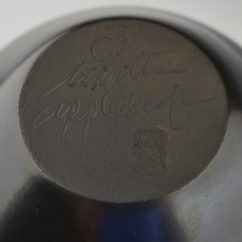 This new feather bowl by Martha is such a terrific example of her classic, traditional San Ildefonso work. Hand coiled, slipped and painted with a green tone, it is referred to as “green-on-black”. It is polished to a very high sheen, and the green slip really comes through. In 1988, Martha and Erik started using this clay slip. “The green clay now holds special significance for Appleleaf. “We all got Indian names and the girls all got pretty flower names. I was so upset because my sisters all have nice flower names and my grandma named me Appleleaf. Why not Apple Blossom? Why Appleleaf? But you know how they say my life was already planned when I got that name? We ended up calling the green Appleleaf Green. So I guess it was predestined.” This would be a great addition to anybody’s collection….showing a bit of history from the San Ildefonso Pueblo.

Martha Appleleaf was born in 1950, the daughter of Carmelita Vigil Dunlap and Nicholas Cata. She is a sister to Carlos Sunrise Dunlap. Martha remembers that as a child, she watched her aunts, Maria Martinez and Desideria Montoya, making pottery. Martha learned the art of making pottery from her mother, a woman who earned an unprecedented 20 First Place ribbons at the Santa Fe Indian Market. Martha is the first artist honored with the Southwestern Association for Indian Arts’ new Traditional Pueblo Pottery award, In an article written in the Santa Fe New Mexican in 2013, about her, after she won this award it tells that “Appleleaf casually reminisced about her family’s long line of well-known potters. “I kind of knew what was what with watching my grandmother, Desideria Sanchez. She was the one who raised me,” Appleleaf said. “They all sat down together polishing — Maria and Aunt Clara and my other aunt. They didn’t say, ‘Oh, that’s your pot or that’s mine. They all worked together.” “Maria” was Appleleaf’s great aunt, the legendary potter Maria Martinez. Appleleaf’s mother, Carmelita Dunlap, was the daughter of Juanita Vigil, one of Maria’s sisters. “Aunt Clara” Montoya was another one of the sisters”.

It’s been a pleasure working with her son, Erik Fender for many years. In that same article it says, “It was kind of nice when my mom received this award,” Appleleaf’s son Erik Sunbird Fender said, “because it’s like coming back full circle.” At the awards ceremony in 2012, Appleleaf said the honor was as much Fender’s as hers because they carry on the traditional ways of sharing labor, as well as the techniques of gathering and preparing clay and building, sanding, polishing, painting, and firing the pots. Just as her grandmother and aunts would polish together and Martinez’ husband Julian would paint her pots, Appleleaf and Fender share various stages of the process.