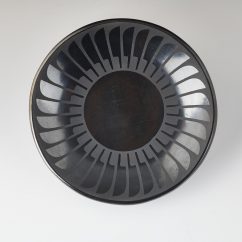 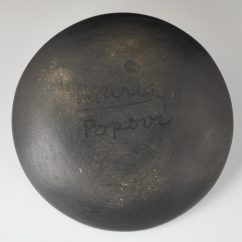 This is a classic plate by Maria and her son, Popovi Da. Maria made and polished the plate and her son, Popovi Da did the painting. The plate is highly polished and has a feather pattern as the main design. The feathers are very tightly painted. You can see this design on many of their pieces in the late 1950’s. It is signed on the back in the clay, “Maria Popovi “. That signature tells us that it was made around 1956-1959. It is in wonderful condition.