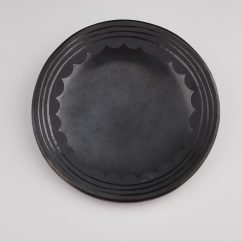 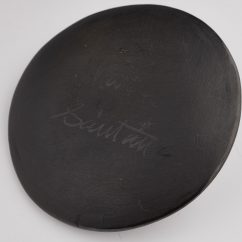 This is a wonderful example of the work Maria made with her daughter-in-law, Santana. It is hand coiled and traditionally fired outside. The design is referred to as a “cloud pattern” with scalloped cloud forms below the three painted black lines that act as a border for the plate. It was made and polished by Maria and painted by Santana. It is beautifully polished. The plate is signed on the back, “Marie + Santana”. It is in very good condition with no chips, cracks, restoration, or repair. This signature tells us that it was made between 1943 and 1956.