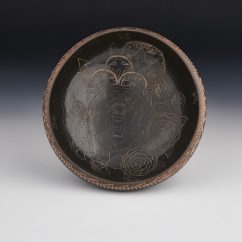 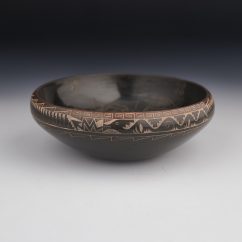 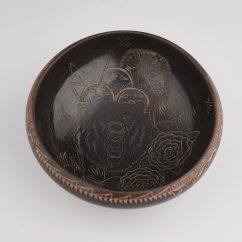 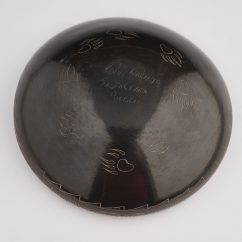 This is a new hand coiled and traditionally fired incised open bowl by Kevin Naranjo. I particularly like the open rounded shape, with the detailed work on the outside of the rim depicting mountains and two avanyu and spirals. Looking inside, Kevin has etched a great bear, roses and leaves, figures, arrowheads, and bear paws. Like others in his family, there is a delicate overall feeling with the drawings and symbols, set against the chocolate brown polished clay. The bottom is fully polished with a circle of bear paws around his signature. His incising is extremely realistic.

Kevin Naranjo, “Turquoise Mountain”, was born into the Santa Clara Pueblo in 1972. He was inspired to learn the traditional art of hand coiling pottery at the age of 10, by his family. His love of nature was a great inspiration for his design work. He learned to pot form his grandmother, Ursalita Naranjo and from his mother, the noted potter Geri Naranjo. His sister is Monica Naranjo Romero.

He gathers his own clay from the sacred grounds within Santa Clara Pueblo. He hand mixes, coils, shapes, crafts, and fires his pottery the traditional way, outdoors. Kevin has won many awards at the 1999 Santa Fe Indian Market, and at the Gallup Indian Ceremonial.