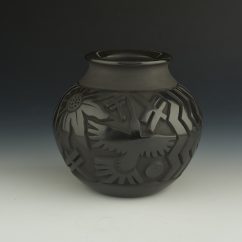 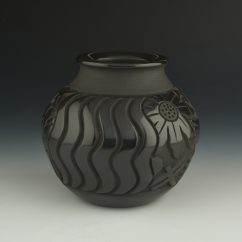 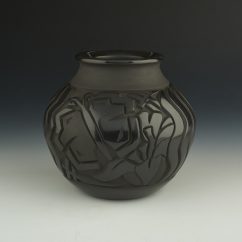 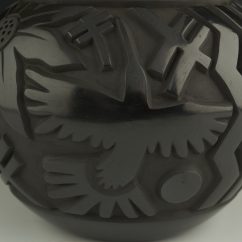 I am so pleased with the new black polished jar by Harrison. I had asked him for this shape, and design work with LOTS of polishing including the attractive lip. He did everything that I requested, and the result is marvelous. This is a hand coiled, deeply carved black jar that is traditionally fired outdoors. Harrison has carved a sunflower, dragonflies, hummingbirds, butterfly, lightning bolts, and shows flowing down waters. There is always a lovely balance between his polished areas and his plain black matte areas. Artfully done!

Harrison Begay Jr. was born in 1961. He was raised in the small Navajo community of Jeddito, near Keams Canyon, Arizona. While he was in college, he studied to be a painter. After college he turned to pottery, as an art form, and began to enter his pieces in numerous shows, winning major awards from the ’80s until the present. He is viewed as an innovator of Native American traditionally made pottery. Many years ago, he married a Santa Clara woman and learned the New Mexico pueblo style of pottery from his mother-in-law. Years later, his pottery shows deep clean carving and includes black, red and brown-fired pots. He now focusses on petroglyph patterns, geometric designs, and Navajo imagery. His son Daniel has become an acclaimed potter as well.