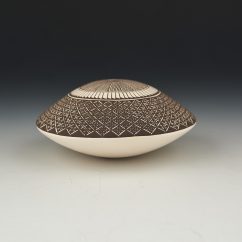 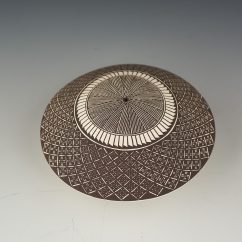 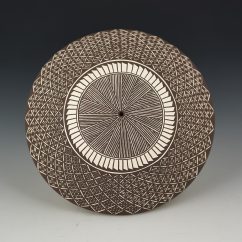 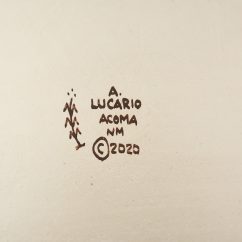 This phenomenal seed bowl has amazingly intricate painted patterns. Feather, the mountains for protection, and the North Star in the center for guidance. What a steady hand!

We are so pleased to represent Amanda in our gallery. We have worked with Rebecca, and Daniel, and it is wonderful to have this skilled member of the Lucario clan join us.

Amanda Lucario is a member of the Acoma Pueblo near Grants, New Mexico, a people known for incredibly intricate pottery designs. Amanda Lucario was born at the Acoma Pueblo in 1984. Her mother is the well-known potter, Rebecca Lucario, and her brother is Daniel Lucario. Amanda says she learned most about the traditional way of making pottery from her mother, but she also learned a lot from her aunts: Marilyn Ray, Carolyn Concho, Judy Lewis and Diane Lewis.

Amanda would like everyone to know that she’s still working on perfecting her techniques and she’s always grateful for the motivation she receives from her mom and her aunt.

“I mine my own clay. It is a natural clay we use. We process it,” Lucario said. “We use a plant. We boil it and get the sap from that and you add it to the paint, and it turns the paint a darker brown and helps it stick.”
As an artist, Amanda says is her job to preserve the traditions of the past.
“Nobody does it anymore hardly,” she said. “It’s getting lost. And so is our language.”